What exactly is lippage?

Lippage is the vertical displacement between adjacent tiles (One tile being higher than another, not when one tile is sunken in). This is defined in the ANSI (American National Standards Institute) standard   A108.02, Section 4.3.7: "Lippage refers to differences in elevation between edges of adjacent tile modules."

When excessive, can lead to chipping or tripping hazards. There are industry standards for determining whether the amount of lippage is acceptable or excessive. American National Standards Institute (ANSI)
A108.02-2013, General Requirements: Materials, Environmental, and Workmanship, Section 4.3.7("Lippage-Guidelines, Explanation, and Caution") explains with what allowable tile lippage is and how to avoid
excessive lippage. For example, when grout joints are less than 6mm (1/4") wide, the allowable lippage is 1mm (1/32"), PLUS the inherent tile warpage. For grout joints 6mm (1/4") or wider, this becomes 2mm
(1/16"), PLUS the inherent warpage.

​What is acceptable Lippage?

The ANSI standard notes that the perception of lippage is influenced by many factors such as:

A) The allowable thickness variation of the tile modules when judged in accordance with manufacturing standards.

B) The allowable warpage of the tile modules.

C) The spacing or separation of each tile module, which would influence a gradual or abrupt change in elevation.

Additionally, variations in the plane of the substrate will also affect lippage. In many cases, when tile is installed by the thin-set method over an uneven substrate, the installed surface will not meet lippage
standards.

What is the allowable warpage of a tile?

The ANSI A137.1 standard defined allowed warpage according to the type of tile. For a paver tile (commonly used on floors) the allowable warpage is defined as follows:
5.3.1.2.6 Warpage. When measured as described in ASTM C 485, the warpage of each tile in the sample shall not exceed 1.0 percent along any edge nor 0.75 percent on either diagonal. From this formula the allowable warpage can be determined.

The intent of the standard is to define reasonable lippage from one tile to another. When a tile is warped but within standards, all of the corners cannot be set in the plane of the adjoining tiles. Accordingly, the tolerance for variation from tile to tile includes the actual warpage of the tile. If there is no warpage, the lippage should not exceed the value in the table. 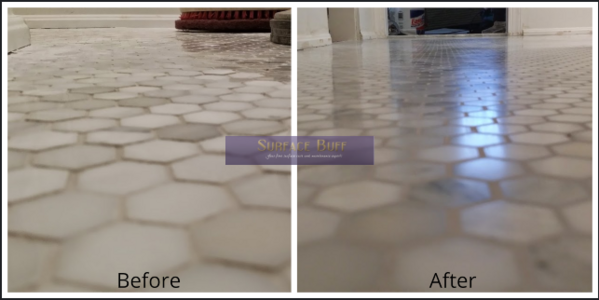